I have been asked several times how I do my films with so little equipment so today I write this article to give some clues.

I have been travelling around the world for the last five years producing all kinds of films and carrying everything I could on 30 kgs of equipment in my back, including not just filming but also climbing and diving gear and soon also a drone. That means that all I couldnt have on equipment I had to substitute with something light and free: creativity and sensibility. And a strong desire for seeing the world and communicating it to others. There is no other posible answer. WHen you learn to tell a story in a minimalist way you have to make sure that what there is on the frame is what really matters. That all the emotion has to be contained there. It is a big exercise of simplicity and honesty. To film a gaze, someone touching someone or a kiss, you dont need an aeroplane and a bunch of lights, you need sensibilty and know how to CONNECT and TRANSMIT that to your audience. That’s it. 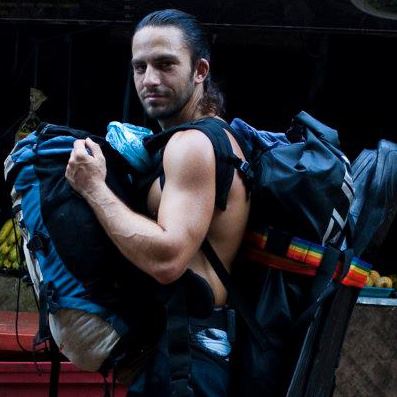 WHAT CAMERA DO YOU HAVE?
When I made Agape. Story of a dream I had a Gh2 camera, two lenses and a broken tripod that didnt even allow me to make pans. The only movements there are in the movie they are in a very precise part where I felt I really had to do it and it is handheld, in complete darkness only with a couple of poor ambient lights and for me is probably the best sequence of the film.
I think you can make the best film ever with simply fixed shots and a movement is not necessary as long as the story doesnt ask for it. Have a look at the last multiple Oscar winning film Amour. After watching El Mariachi of RObert Rodriguez for example I realized I was not the only one to do something good with very little.

All the time I could have spent researching on forums looking for the latest camera I spent it living, watching movies, reading, or learning from interviews with the best cinematographers and thinking how to tell a story in a sincere way. I prefer to know just enough about tecnical stuff to leave space in my head for other things that I think contributes more to do a good film.

Now I have a GH3 and thinking about getting the GH4. There is a bunch of people making incredible stuff with this cameras so for sure I am not the only one. Anyway if you can have an Arri or a Red One, even better. 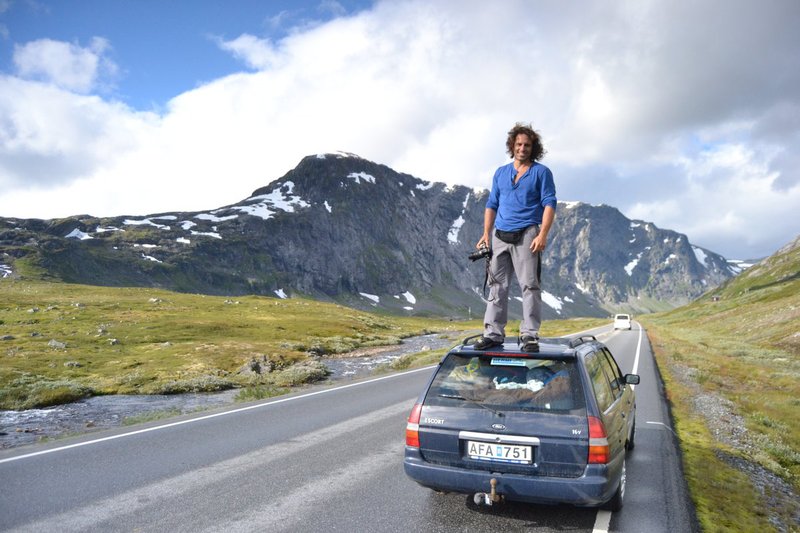 WHAT KIND OF MOVEMENT GEAR DO YOU USE?

I didnt learn in a cinema school using cranes, dollies and that stuff, otherwise I could have stayed home thinking that I need a whole aeroplane and a bunch of people to film anything. I learned filming with what I could fit on a backpack and a strong desire for telling stories, and I keep doing it like that even if the backpack gets heavier and heavier. I am quite bored of young people waiting for money to do their short films and thinking more of how to get the money than just going out and do something good with what you have.

I think nowadays many filmmakers pay more attention to show how good they are and what amazing shots they can do with a steady, or a dolly or a drone instead of telling a story with the heart. I guess is a mirror of the world nowadays where it matters the surface and not the esence. Agape Story of a dream proved me that still is posible to do good things just with sensibility and appliying to the most basic human feelings. I have been all this time competing with short films of budgets of thousands of euros and still Agape was succeeding wich proves that still people gets touched by something simple that tells something instead of an aerial shot in 4K of something that says nothing.

For me filmmaking is not about showing what you can do with a thousands of dollars of equipment, is about telling human stories to touch humans hearts and my way to do that is simplicity. And the directors and photographers I have always admired most are those that dont want to be the protagonisht of their work, but they know how to make the story be the real protagonist.

Anyway I have a slider, a steady and a shoulder mount but honestly 90% of my work is made just with a tripod. 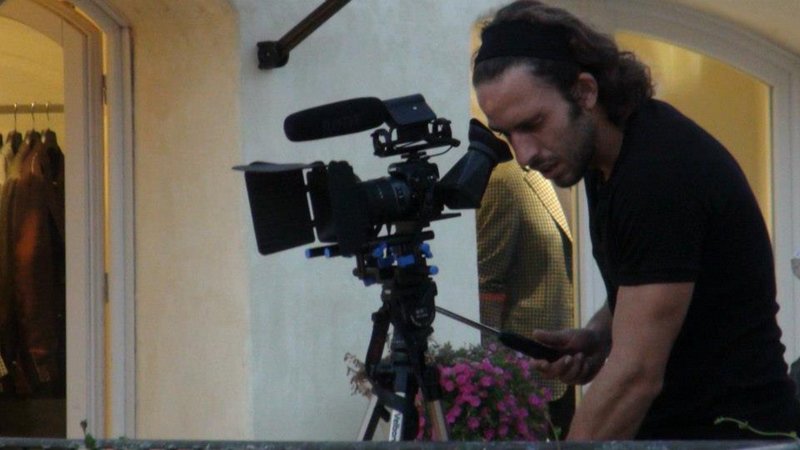 WHAT SOUND EQUIPMENT DO YOU USE??

This is my weak point so if there is any sound recordist that wants join me, drop a line. I normally used an external Rode video microphone on the camera that just died thanks to the humidity of the tropical climate so I have to get another one that will be a zoom recorder and a ROde Stereo Mic.

WHAT LIGHTS DO YOU USE??

I have never used ANY LIGHTS in any of my films, just recently I have been playing with some lights and I dont like it. Instead I have been observing, observing and observing how the light behaves in as many different situations, climates, environments and countries as films I have done all over the world. Always, everywhere I have been constantly observing and asking myself “How would I film this?”

-All the time I havent spent playing with the lights, I spent it on scouting locations like a maniac until I find “that spot that at that time have that light that the story is asking for”. From my point of view what I look for when I make a film or when I see it is HONESTY. I like a movie when instead of saying “what a beautiful shot”, you say NOTHING and just feel that sensation in the stomach. That sensation, that touch in the heart is what I have always looked for when making or watching a film.

-All the money (and back problems if I have to carry more weight) I didnt spend on lights I spent it on good lenses. I recently filmed on a completely dark environment with a Nokton 0.95 just with the light of some candles and you will see the result soon. There might be some noise but no one ever told me “there is noise in this shot”, they asked “how did you get that atmosphere”.

I dont say my way to do the things is the best. And actually I say I WANT TO LEARN everything about how to use properly the artificial lightning but in my opinion it requires as much sensibility and delicacy as a painter needs to use the pigments. If you are good enough to know how to touch someones heart by making a bunch of artificial lights look natural, great, otherwise, go simple. Me, I want to learn both.

Anyway we dont go around looking the world with a bunch of lights around us, we see mostly with the light of the sun, and at night with some small lights. I have been living, looking and filming in this conditions most of my life and so far I cant complain. And I am not the only one, I have learned cinematography by reading about the best photography directors and for example one of the best spanish DOP used mostly natural light, reflectors, difussion panels or a single light if really necessary. Even if my favourite ones like Cristopher DOyle are masters on using the artificial light and there is where I want to go.
In the end my conclusion is that I love my way of working, it makes me free and it has given me great results and satisfactions but we always want to learn more and more and I really want to learn all the secrets of lightning and camera movement and all that but always giving priority to the story, and thinking that anything you do needs to empower the story instead of creating an artificial layer to cover something without esence. In the end all that matters is how much work, time, creativity and sensibility you put on your work with only one goal: to tell the story in a SINCERE way, and CONNECT with the audience. 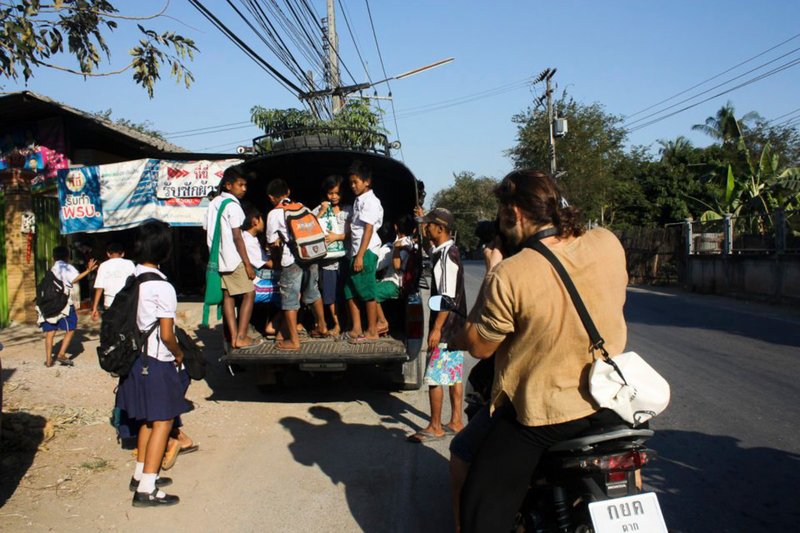